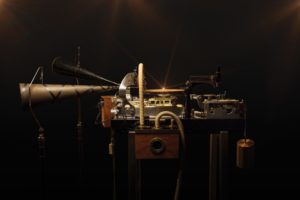 It took Nick Bergh 10 years to collect, recondition and reassemble the very first electrical recording equipment from the 1920s. Record labels used this equipment to make studio recordings, but also employed it on location – for example, in the American South. The three-part TV series American Epic covers this fascinating period; this documentary, containing 20 sessions by contemporary artists, follows on from the series. The artists visit the recording studio where Bergh’s impressive equipment – partly powered by weights and completely mechanical – is set up. There, they sing into a condenser microphone and what they play is recorded directly into the grooves of a record, exactly as it was done in the era of 78-rpm records. Jack White, one of the executive producers of the American Epic project and former front man of The White Stripes, supervises the recording process and asks the participants to sing songs from the 1920s and 1930s (see American Epic: The Big Bang) as well as their own compositions. The American Epic Sessions provides an exciting panorama of American musical history: Cajun, gospel, blues, old folksongs, Hawaiian music and jazz, as well as a new song composed and performed by Elton John. Also featuring the likes of Beck, Stephen Stills, Pokey LaFarge, Taj Mahal, Willie Nelson and Alabama Shakes.